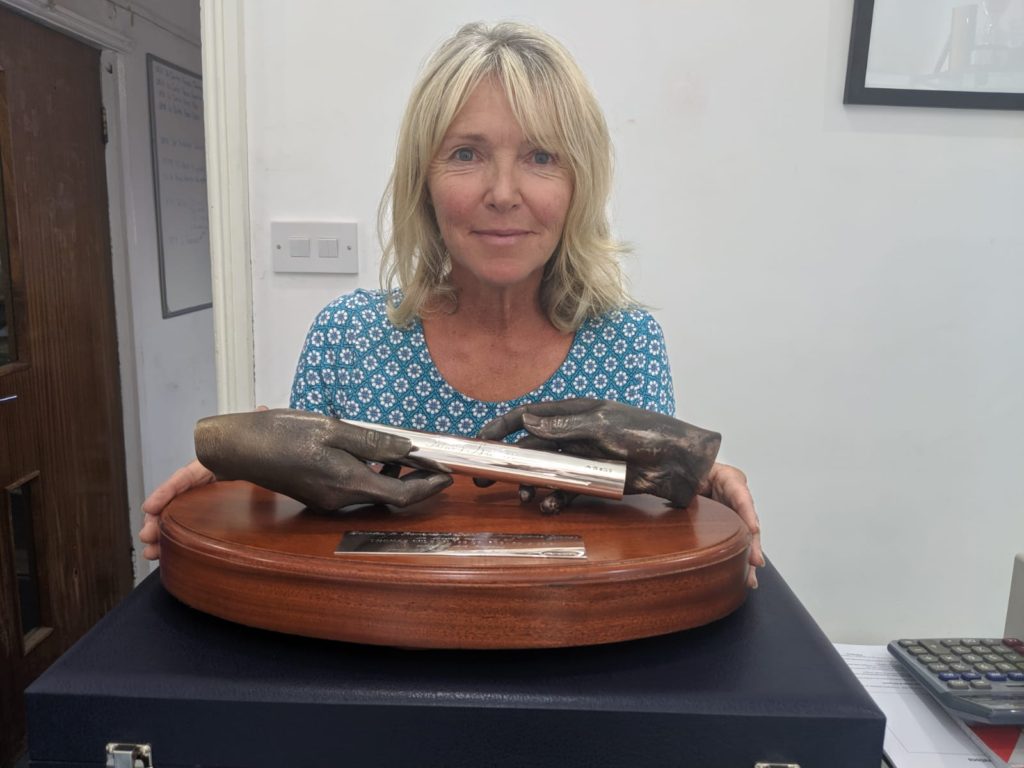 A symbolic baton celebrating organ donation is travelling around the country in the lead-up to the World Transplant Games which take place in NewcastleGateshead between 17 and 23 August 2019. The Games are a celebration of a second chance of life for over 2,500 participants and shine the spotlight on the importance of organ donation in saving and enhancing lives.

The baton will make the journey northwards visiting several transplant centres around the country on a truly emotive journey between 12 and 16 August before arriving in NewcastleGateshead, for the start of these inspirational Games.

Recipients of Tom’s organs will be at both the start and finish of the relay. 6-year-old Fatima Mirza, who received part of Tom’s liver, will start the relay at Royal London Hospital and Gordon Paw, the recipient of Tom’s heart, will be in Newcastle to welcome the baton at the end of its journey.

‘Tom’s Baton’ was created in memory of Tom Wilson, a talented hockey player who lost his life in December 2015 in a freak accident at the age of 22. After his death, his parents Lisa and Graham agreed for his organs and tissue to be donated. Lisa, who also lost Graham eight weeks later to a brain tumour and sepsis, has since become a passionate campaigner for organ donation.

The family commissioned a sculpted baton being held by two bronze hands which represents giving and receiving the gift of life that organ donation provides. The baton was originally presented to Transplant Sport at the British Transplant Games 2019 in Newport. Transplant Sport is the largest UK charity dedicated to raising awareness of the life-saving benefits of organ donation and the importance of staying healthy and active post-transplant.  Together with daughter Pippa (aged 24), Lisa also lit the Donor Family Flame at the British Transplant Games, Transplant Sport’s flagship event, earlier this summer.

Lisa said: “My daughter Pippa and I are really proud of the decision Tom made to become an Organ Donor. Tom’s legacy is the gift of life and hope he gave to the 50 people who received his organs and tissue transplant. ‘Tom’s Baton’ reflects that beautifully.

“It symbolises the passing on of something precious and because it is a relay baton it has a link to sport that Tom and his dad loved so much.

“We know it will inspire others, not only competitors, organisers and volunteers at the Games but also those who are interested in following Tom’s example and becoming donors and talking to their friends and families about why it is so important.”

Each transplant centre will host events welcoming the baton with transplant physicians, recipients and athletes in attendance.

The final leg of the baton relay will see a group of cyclists accompany the baton from Leeds to the Angel of the North. The cyclists will be led by Professor Paul A Corris, a Transplant Physician at the Freeman Hospital in Newcastle and Medical Director of World Transplant Games 2019, and joined by transplant recipient cyclists from around the world, including one of Professor Corris’ patients – a double lung transplant recipient. They will then proceed with the baton through Gateshead, calling at the iconic Angel of the North and onto Newcastle city centre before finishing at Grey’s Monument on the night before the official opening of the World Transplant Games.

“Everyday lives are saved and transformed through organ transplantation and raising awareness of organ donation has never been more important – particularly with the law about organ donation changing in England and Scotland next year.

“I wish Team GB all the best at the World Transplant Games and hope their achievements in the Games and commitment to raising the profile of organ donation will inspire others to have their donation conversation with those closest to them and make their choices known.”

Participants from 59 countries across the world, including Azerbaijan, Ethiopia and Andorra will travel to the North East to take part in the Games. Sporting events will take place at top venues throughout the region, including Gateshead International Stadium, St. James’ Park, Sunderland Aquatic Centre and Close House Golf Resort.

Graham Wylie, chair of the World Transplant Games NewcastleGateshead 2019, said: “It’s inspiring to see two recipients of Tom’s organs starting and finishing the baton relay that will work its way up through transplant centres around the county. Tom’s baton symbolises the power of organ donation and will inspire more people to have conversations around donation and make their choices known.

“We can’t wait to welcome participants and their supporters to the region next week for what will be an inspiring celebration of human courage and physical fitness.”